By Semper Excreedius (acting editor)
Following what appears to be a total lack of newsworthy occurances in the entirety of Hive Primus and having such dedicated reporters working here at the Bullett, we have decided to publish in full a copy of the Kinnockian Periodical News. We would like to assure our loyal readers that, our news team has vowed to redouble our efforts in hunting down news, and this current issue is not just a copyright infringement that due to the relative distances between Necromunda and Scargill,  it is unlikely to result in legal action. We would also like to state that this issue was definitely not the panicked result of a junior editor finding a copy of the Kinnockian in a waste receptacle at the spaceport.

Following unsuccessful invasions by  Necrons, Tau, and Aeldari, members of the Planetary Defense Force (Kinnock region) are taking a well deserved breather. The attacks occured in  Scousehatton, Grimbling & Stoop respectively. Balto Krudditch commander of the force has gone on record to say that he is confident that despite 3 separate hostile forces attempted to attack and presumably enslave the good people of Scargill, his army will remain victorious. He also went on to say that "No stinking alien pervert is going to probe the Emperor fearing folk of Kinnock while there's breath in my body!". Despite there being considerable casualties in each engagement, including the legs of tank commander Revs Cantalope, sources close to the Adeptus Munitorum have praised Krudditch's results while still remaining within budget. It is believed that Krudditch himself has recommended that Revs Cantalope be fitted with hemp legs as "tank commanders don't do much walking anyway". Speculation abounds regarding the number of alien attacks in quick succession and why are they taking such an active interest in the region. Imperial Tarot Adepts are currently turning over cards to attempt to deduce where another attack is likely.
By Shamval Frasf Guild of Scriveners.

The xenos structure, named by esteemed xenobiologist Gubbals Gombii as 'Necron Monolith ' is continuing to cause an obstruction in the centre of Market Plaza in the market district of Kinnock. Several Scargill orbits have passed since Inquisitorial forces and unknown looters fought over the contents of said structure with violent results from within the structure. Also cause for concern is the large number of PDF units guarding the structure. Residents claim that due to the long term nature of the guard duties there has been a marked increase in 'lounging'. Locals also complain of the increase in litter and the additional expense of paying 'protection tithes' during the hours of darkness. Another cause for concern is the large overtime expense caused by round the clock surveillance.
By Maklakk Fourch Guild of Scriveners

Leaked Astra Militarum documents have highlighted that there is a 4% rise in 'Chimera Surfing'. This worrying new trend was first sighted on Hemmerdale when several guardsmen were seen 'riding the iron donkey' as it is some times known. Since then engagements on Lernin Kerv, Bluescreen and Chapstick IV have been recorded. Recent engagements here on Scargill have been recorded and are of particular concern to Adeptus Mechanicus paint adepts. In a recent interview a member of the Ad Mech (who did not want to be named) has stated "The unruly human predisposition of stabilizing on the top of the blessed Chimera chassis is in direct negation of Imperial directive AM4589#CS37. This is resulting in a 2.785% increase in detergent use and a receptacle of Mars Own Lubricant and Sprocket Sanitiser lasts 3.123% less than this time 18.3 Scargill orbits ago. A report has been made to Astra Militarum forces and disciplinary measures will be made. All praise the Omnissiah!". A spokesman for Planetary Defence Force Kinnock region issued the following statement; It is believed that the habit is a show of eagerness that allows troopers to engage with the enemy with alacrity. This fervour although thoroughly commended is to be discouraged to reduce the cost of hull maintenance. Troopers observed 'hull surfing' will be flogged post combat. No excuses. Even for martyrdom.
By Dward Hitachie guild of Scriveners 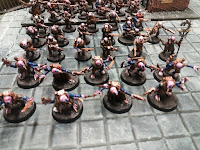 Popschmann's Hair Emporia has been dealt a blow by determined criminals. The entire stock of the Vanity Lane warehouse has been cleaned out by brazen scofflaws. Of particular concern is the entire stock of 'Pammie' super luxuriant hair apparel have been removed. These head accessories are highly sought after by toupee experts from many parts of Gremthorpe and can fetch high prices even in Collierie. This large theft is thought likely to cause a collapse in the second-hand wig market due to a glut of cheap high quality items. Adeptus Arbites have issued the following statement "Any citizen approached by individuals attempting to sell an untagged hairpiece should report it immediately to their nearest Arbites Precinct. Possession of stolen goods could lead to severe fines and possible electrolysis punishment.  Securicam® footage shows the thieves all appear to be wearing hideous bulbous masks to obfuscate their identities.
By Pomp Argulbal guild of Scriveners

Caryatid Assassin 'On Loose'. Reports are coming in of an unaffiliated Caryatid in the Lower Skunkton hab ar...